Things to do in Mistley

As marked out, covers about 3.5km. This can be extended a bit and alternative routes (depending upon weather and group ability/preparedness) are possible.

Route is outlined in purple.

Can be extended westwards along The Walls (top left).

Can also be extended south past Dairy House and back round to meet the route as marked.

I would stop and various points and talk a little bit about the area or history.

Opposite Mistley station car park is one of a number of former maltings buildings that have been converted into apartments. These buildings date from the very late 19th century and after closure and a period of disuse were converted in the late 1990s and 2001.

Turn left and proceed down the hill passing the Edme works on the left and, within this site, another old late Victorian maltings building can be seen. Edme produce malted grains for the food industry, and it is a thriving business with a sizeable export market. Sadly the company is planning to relocate to a greenfield site at Horsley Cross within the next few years.

Near to The Thorn hotel and restaurant cross the road to the Swan Basin and head down to the waterfront. On your right is the site of a warehouse that was demolished recently and fine views of the port and the old maltings buildings (now apartments). The Swan Basin with its fountain is on the left.

Take care on the quay. This is still a working port and lorry traffic can be encountered.

The quay here is now officially a ‘village green’. This is part of the ongoing campaign by local people to have the ugly, two metre high fence that now encloses the quay, removed. It was controversially installed by the port operator about 13 years ago. It is hoped that low level wrought iron railings can be installed. This would enable a clear view of the estuary and allow leisure craft to dock here and visit the amenities.

Turn left/west and head towards Mistley Towers. The Towers are Grade I listed and are the remains of a Robert Adam designed church that was built in 1720. The wooden timbers of the nave suffered decay and demolition resulted. There is (fairly overgrown) path around the back of the Towers and the pavement beside the road enables a view of the frontage.

Continue along the path to The Walls, a tree lined greensward area that fronts the estuary on the right. Here there is plenty of mud to see at low tide, which is of course ideal feeding ground for a wide variety of wading birds and other wildfowl. It is also where many swans can usually be seen. Swans have congregated in this area for decades, probably linked to the waste grain that would find its way into the river from the maltings. You may spot some black swans, which are not a native species (Australian), but three or four have lived here for many years.

It is possible to continue along The Walls to Manningtree where shops, pubs and cafes can be found but the suggested route is to turn back towards Mistley Towers and then carefully cross the main road to the side where an old fashioned signpost, a war memorial and the Mistley village sign sit on a small grassy triangle of land. Keep heading toward the houses and turn right up a gravel track, called The Green, in front of the large grey house (Mistley House).

This track will take you to Mistley Green where a row of 12 Georgian cottages can be seen on the left. A number of larger houses lie at the eastern end of the Green, backing onto Edme’s factory. The tall chimney with Edme Malt Extract Works on the side dominates the skyline. It is no longer used and was set to be demolished but a local campaign led to it being saved.

Walk along the western, right hand side of Mistley Green and take the footpath (Eileen Jackson Path) that borders the meadow and leads to Mistley and Manningtree Parish church. It dates from Victorian times (1868-70) and can be visited at most times. Turn left at the church and follow Church Lane, an unmade track that runs south between Mistley Cricket Club (MCC) grounds and the cemetery. The track goes under the railway and rises steadily uphill. Meadows behind the hedge on the left and the grounds of Old Hall on the right. Old Hall was originally the stable block of Mistley Place, a large country house built by the Rigby family in the 1720s but demolished in 1851. Most of the land that you are walking on today formed part of the Mistley Park Estate.

At the top of the hill turn right, with the brick wall of Old Hall’s garden, remaining on your right. Take the next left between wooden posts and left again along a track with woodland on the left and The Old Dairy house on the right. This was once one of the farms on the Mistley Park Estate. Go through the metal gate and you will have views across old meadow land with maltings buildings in the distance on the left, Furze Hill woodland ahead and more meadowland and a lake on the right. Walk down the slope towards the stream and a metal gate on the right.

There are choices here:

Short route: Turn left and walk across the meadow, across a shady green lane and into another meadow. Keep heading straight towards the railway line and Edme’s buildings that lie ahead. Go up the steps, under the railway and the turn left on a narrow path that will emerge at Mistley Green. Proceed to the main road and turn right up the hill to return to the station – or pop into The Thorn for a drink. Tea, coffee and alcoholic drinks are available.
Longer route: Turn right through the metal gate and follow the stream to a wooden bridge. Cross the seam on the bridge and continue across the meadow (which can be marshy after prolonged rain) through another gate in the hedge and up the hill. Again, lovely views back to The Old Dairy and towards the Stour valley. At the top of the hill bear left and skirt the edge of the field down hill and go through the gate. Keep the woodland on your right and pass through another gate which brings you into the wood. Proceed a few metres then either go left and through a gate to return to the stream and follow route 1; or bear right and uphill. The path is quite steep and narrow and after a few metres will eventually meet a path than runs east – west through the wood. Turn right and then left through an old fence line (concrete posts still remain) up a steep slope towards a very old and gnarled oak tree. This is ‘Old Knobbly’ and is one of several ancient oaks in the woodland here. Many are over 500 years old.

The woodland site here was equipped with searchlights and anti-aircraft gun batteries during World War Two. Nissen huts housed the staff/troops, and these were later used to house prisoners of war and then homeless people. The bases of these huts can still be seen in the woodland.

There is metal bench near Old Knobbly. Take the path beside this into the woods and keep heading north. The path will eventually head downhill, quite steep and narrow towards the end. You will emerge at a rather wet patch and a stream which has to be crossed using the grid and stepping stones. Go through the gap in the fence and turn right up hill on the gravel track – Green Lane.

Take the next left turn onto another wide gravel track with a house on the right and woodland on the left.

After a short distance the gravel track becomes a tarmac road called School Lane. Houses on the right and a road into a relatively new housing development that was built on the site of former maltings buildings and storage facilities that were destroyed by fire in 1996 and subsequently demolished. Continue on School Lane and another large early 20th century maltings building is on the right. This is Free Rodwell House, now apartments. Free, Rodwell was the company that built most of the Maltings in Mistley – later becoming part of Allied Breweries/Ind Coope.

On the left is a modern working maltings that is now owned by the Crisp Group (also owners of Edme). Much of the malt from here is exported by ship from Mistley Quay.

School Lane emerges onto the High Street next to the railway bridge. Turn left and proceed down the hill to Mistley station which is now on your left hand side. 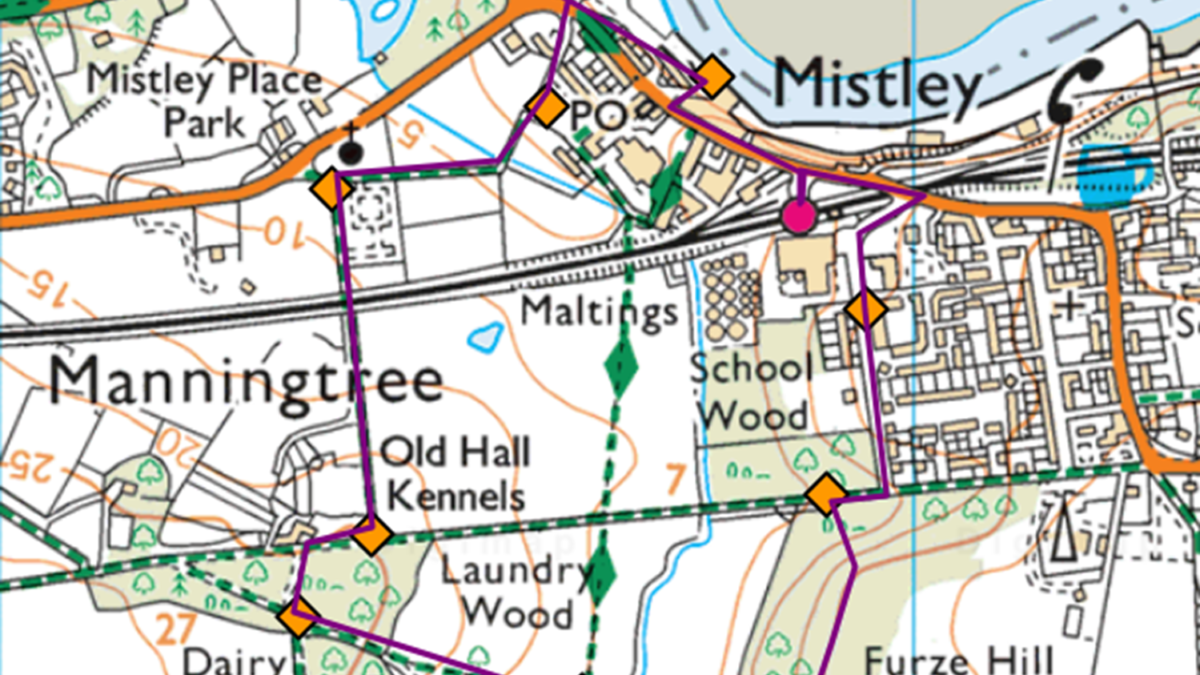